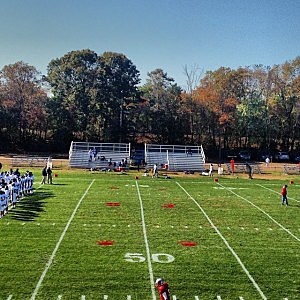 Alaam Horne took the very first play from scrimmage 67 yards for a score. The St Joseph Wildcats never looked back.

C.J. LaFragola added three scores on the ground (2, 65, 14) and a receiving touchdown (15), and the Wildcats defense forced three Vikings turnovers en route to their 41-8 victory on Saturday.

Despite a spirited effort by Atlantic City in the first half, including an offense that controlled the clock and moved the ball effectively, St. Joseph was able to keep the Vikings off the scoreboard. The Wildcats took a 14-0 lead into halftime, and would've been up by 21 had a penalty not negated an 81-yard touchdown run by Alaam Horne.

LaFragola single-handedly ended the contest with three pivotal plays early in the 3rd quarter. Less than a minute after his exciting 65-yard touchdown run, LaFragola intercepted a Jamir Prevard pass to put the Wildcats in good field position. A few plays later, he took a screen pass 15 yards to the endzone to put the game well out of reach.

Rocco Ordille also added a late touchdown run for St. Joseph. Prevard connected on an 11-yard touchdown pass to Robert Parker for the Vikings' only points of the afternoon.

Here are some of the best calls from Tony Blum and Jim Schafer as heard live on 97.3 ESPN-FM:

Horne 67-yard touchdown run on the 1st play from scrimmage

Here’s a preview of some of the other interviews from this week’s edition of the South Jersey Sports Report:

Listen to this week's show:

We’d also like to congratulate the South Jersey Athlete of the Week:

The sophomore quarterback continues to lead the Cape-Atlantic League in passing after a phenomenal performance against Bridgeton last week. He completed 14 passes for 225 yards and two touchdowns in a 35-12 win. On Friday night, he threw for two touchdowns and ran for another in the Hermits gritty 45-21 victory over Buena.

And 97.3 ESPN-FM has you covered every Friday night from 6-7 p.m. for “Countdown to Kickoff”, followed by our live coverage of one of the area’s best games. It all wraps up with our post game show at 10 p.m.