Yesterday I listed out some of the concerns I have with Jahlil Okafor, Karl-Anthony Towns, and Kristaps Porzingis as prospects.

After reading that article you could come away with the wrong impression that I dislike all of those prospects, which is just not true. To balance that out I’m following it up with what I like about each prospect and how they might translate to the NBA level.

Can shoot from the perimeter? Does that as well.

Passer? Does that too.

There are just very few holes in Towns’ game, offensively or defensively. In yesterday’s article I really had to nitpick, but Towns is a superb prospect. Maybe not franchise level, at least offensively, but a very high likelihood of being a very good player on a very good team.

Towns and Embiid together would have been so interesting to watch develop for the Sixers. What makes Towns such a great fit offensively is that he has the range to step out 18′ from the basket and make a shot, giving Embiid much-needed space to operate in the post, and Towns is a really good passer when facing the basket, which could allow some interesting high-low action to unfold.

But Towns also has a burgeoning post game. With both Towns and Embiid able to operate in the post, but both also having 18′ range, and both also being very good passers, Brown could really attack any and every mismatch he wants, imposing his will and feasting on teams not equipped to handle two post scorers.

Both Towns and Embiid’s versatility as jump shooters and passers would allow the Sixers to run a lineup with 2 post scorers without clogging the lane. It would really be a unique situation.

As the season has gone on so much focus has been on what Jahlil Okafor can’t do that it’s easy to lose sight of what he can. And what he can do he’s undeniably elite at.

Putting into context just how historically great Okafor’s season was offensively, Okafor’s 64.1% true shooting percentage was the most efficient freshmen season of any player with at least a 25% usage rate in sports-reference’s database, which dates back to 2009-10. His 6.8 offensive box plus/minus is the 3rd highest figure for any freshman with that high of a usage rate (dating back to 2010-11). How much Okafor was featured in Duke’s offense, and how good he was at that role, is incredible.

Okafor’s post-up game is something you simply don’t see anymore. His footwork is impeccable. His ability to read how a defender is playing him and have a counter move for every situation is something you don’t see from a 19 year old. How calm and collected he is in the face of a double team can leave you in awe.

He just shouldn’t be this diverse, this experienced, and this well-rounded in the post. That jump up in competition he experienced from high school to high-level college basketball (Duke had the 3rd toughest strength of schedule, per Ken Pomeroy) should have had a more profound impact on his ability to impose his will and be successful down low. But it didn’t, and that’s a testament to his overall skill level.

Some people are concerned about his athleticism, and I think that’s fair on the defensive side of the court. But offensively, scoring in the post is rarely predicated on quickness (laterally, at least) or explosive leaping ability. I would be more concerned if he were a pick and dive or face-up big, but scoring in the post is dependent on balance, quick feet, and the ability to use angles and positioning to get separation and clean windows, and Okafor does all of that very well. Many of the top post scorers in the game are average athletes, and there’s no reason to believe that Okafor’s post game won’t translate.

It might be easy to look at 1.3 assists per game or his 9.4% assist rate and overlook this ability. Don’t. Many of Okafor’s passes were “hockey assist” types, as the first pass out of the double team isn’t frequently meant to end the possession but instead to kickstart a chain-reaction of defensive rotations that, if the offense moves the ball quickly and sharply, are ultimately futile. Kick out, pass, pass, pass, open corner 3 is frequently what you see. And if you look at Duke’s offensive efficiency when Okafor passes out of the post it’s virtually unparalleled for a guy who does it so often.

Okafor’s ability to read a defense, feel and react to where and when the double team is coming from, is as unique of a skill set as you’ll find, and it’s really his distinguishing feature. He sees plays develop in a slow-motion like fashion that you would typically ascribe to a point guard.

We frequently talk about it being a point guard’s league, and hand-checking and other rule changes have certainly given quick, creative guards an edge. But we’re also in an age where we obsess over shots at the rim and three point shots, and there is no better way to get both of those outcomes than an elite, post-scoring big who can read a defense. Corner three’s to be had all day.

Just as an example, Okafor found himself in the following situations and generated assists out of them. His ability to make the correct decision really is uncanny, and I don’t think it’s talked about enough. Al Jefferson? Eddy Curry? Hogwash. 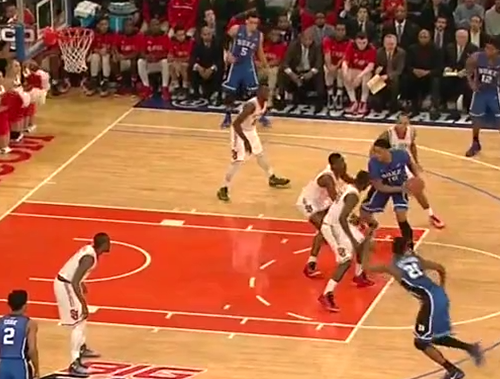 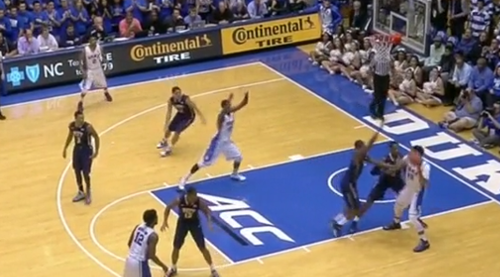 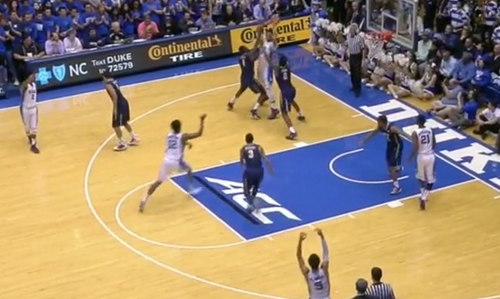 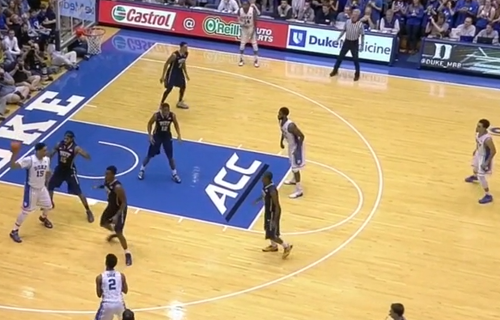 He’s also really good at making the simple pass as well. Kicking out and re-positioning, easy swing to stationed shooters, etc. Just a joy to watch in that facet.

I understand Sixers fans lack of desire pairing Embiid with Okafor, but I do think we tend to undervalue his potential. Risky because of his defense, no doubt, but absolutely incredible potential as well.

Floor spacing. I love it. It’s become one of the key points in today’s NBA, and it’s not going away any time soon.

That’s especially true when you already have a guy on the roster that you project to be a good (to potentially great) post scorer, like Joel Embiid.

But a guy who can also shoot coming off of a screen and shoot off the dribble presents so much more of a matchup problem, and Kristaps Porzingis is one of the rare 7 footers who can do that.

NBA offenses can typically be boiled down to forcing the opponents to make decisions on defense. The more defenders you get involved who have to make the right decisions for a defense to succeed, the higher your success rate in getting a quality look is.

One of the obvious ways to force defenders into being decision makers is to create off of dribble penetration. Get by your initial defender and kick off a chain reaction of rotations that, the moment somebody hesitates or, worse, makes a mistake, can get you an open shot.

For the last 25 years the pick and roll has been a prime way for offenses to force defensive rotations. This is why teams are always on the lookout for John Stockton, Steve Nash or Chris Paul. A multi-faceted point guard who can make good decisions off the pick and roll can absolutely tear a defense apart.

Shooting off of a screen is another way to do that, as both the man defending the screener and the man defending the guy coming off of a screen have to communicate and both have to make the right decision. In terms of gravity score, a 7 footer with a high, quick release, with NBA three point range, and who can shoot off the move has the ability to stretch a floor as much as possible.

This is a facet of Porzingis’ game that could be hindered by his passing ability. Porzingis rarely, if ever, passed, something that I noted in my last column. But I don’t think he’s as much of a lost cause passing the ball as some people do. I’ve seen Porzingis make some really creative passes, and I think it’s more mentality, and team construct, that you have to break him from than a lack of ability and talent.

Porzingis is also a really good shooter off the dribble. There aren’t many 7 footers where you can see him take a running, one footed jumper and go “oh, that’s a good shot” and actually mean it.

But what really separates Porzingis is that he can contribute on the defensive side of the ball, something that’s a relative rarity for a stretch 4. Porzingis is long and quick off his feet, making him a presence altering shots at the rim. He also moves his feet well laterally and uses his length to deny dribble penetration. That ability as a defender, to block shots and defend the pick and roll, two absolute staples for big men, could be incredibly valuable.

Again, Porzingis certainly has his holes, and there’s some risk that his body just never fills out enough to make him a real force in the NBA. But the potential that his strengths carry is extremely high as well.