When the Phillies traded for catcher J.T. Realmuto, the price was steep.  The Phillies had to send the Miami Marlins their top pitching prospect, another prospect, and their young and very capable catcher in Jorge Alfaro.  In his first season with the Phillies, Realmuto showed that he was worth the steep price.

Realmuto had been named a "finalist" for the award, alongside Austin Hedges of the San Diego Padres and the veteran Yadier Molina of the St. Louis Cardinals.

Bryce Harper had been named a finalist for the award for right field.  That honor ended up going to Cody Bellinger of the Los Angeles Dodgers.  Jason Heyward of the Chicago Cubs was the other right field finalst.

At pitcher, Aaron Nola was considered one of the finalists.  That award went to Zach Greinke.   Greinke was traded to the Houston Astros at the July 31 trade deadline, yet his time with the Diamondbacks was apparently enough to beat out Nola and Jack Flaherty of the St. Louis Cardinals.

The Rawlings Gold Glove award was the first by a Phillies player since 2012, when Jimmy Rollins took home the honor. 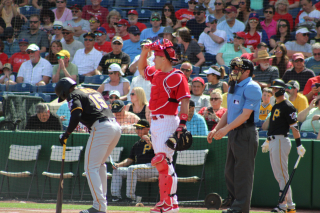