Most of the losses this month for the Flyers have been ones that focused primarily on the defensive side. There were far too many mistakes, and the Flyers were relied upon to score at least four goals just to have a chance.

Monday’s game had a different feeling at the end. The result was the same, a 2-1 defeat in overtime to the New York Islanders, but this was not a poor defensive effort from top to bottom. This was a few mistakes at the worst time haunting the Flyers during a continued stretch where so much of the results blends together.

Losses are losses at this stage of the season. Whether it’s 9-0, or 6-1, or 2-1 in overtime, they all hurt the same in the standings. It’s a missed opportunity at two points that you had when the night began. But in this game, when the Flyers did deliver the effort and executed better for almost the entire 60 minutes, two glaring mistakes cost them, and this time, they didn’t have the answers to make a couple of mistakes change the result.

1. Winning on the Boards

From the start of the game and throughout regulation, one thing was clear that wasn’t present in the previous few games for the Flyers. They were winning board battles. They were doing everything in their power to make sure the Islanders didn’t have much opportunity to control the puck and control the play.

For most of the game, it worked for the Flyers. They had chances, they kept the game in their control. There is an energy that showed they were playing harder and more competitive than we’ve seen lately.

That said, it needed to produce more scoring chances than it did. A lot of the play was to the outside on the perimeter, which the Islanders are fine with. The Flyers got some odd-man rushes and breakaway chances on a team that is usually very tight defensively. Give plenty of credit to Ilya Sorokin, who was outstanding and stole this game, but they needed to finish and didn’t and that’s what allowed the Islanders to hang around all game.

It’s no secret that Sean Couturier is going through something. He unexpectedly missed Saturday’s game as a late scratch, then returned for Monday’s game after going through an MRI on Sunday.

Alain Vigneault said after the game that Couturier essentially has a hip flexor. He’s playing through injury. A lot of guys do the longer a season progresses. But Couturier’s presence alone, even while injured, clearly has an impact on this team.

I agree with Couturier’s assessment following the game. It wasn’t his best. But it made the rest of the team look better around him. It’s how necessary he is to this team and any chance they have at success, or in this case, at righting the ship.

Throughout the first half of the game, the Flyers controlled the game and out-shot the Islanders easily. But until that first goal was on the board, there was this sense that there was always the opportunity for the game to slip away from the Flyers.

In the end, that was ultimately what happened, but the Flyers did finally break through and get on the board first thanks to a hard-working shift from Jake Voracek and Claude Giroux with Oskar Lindblom going to the net for the goal.

There was just this feeling that this was the kind of goal that was going to help the Flyers get on the board. It was going to need to be greasy. The centering pass from Giroux went off Lindblom’s skate and in. It’s a hard-earned goal that takes a favorable bounce.

4. A Missed Clear and Breakdown

Ok, we now return you to regular programming. Talking about some of the things the Flyers did well is certainly fair, but the heart of the matter is the end result. The focus then shifts to how we got there.

First, a look at the tying goal that came early in the third. It results from missed opportunities to clear the zone and the Islanders getting sustained pressure.

As the puck gets to the net, there is an occurrence that has become a common theme with the Flyers as a defense. Take a good look. 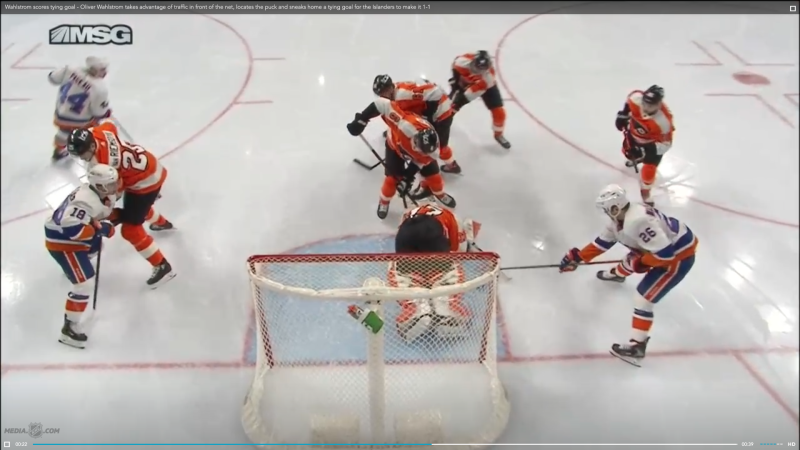 Count the orange jerseys there. There are five Flyers near the blue paint. There are only four Islanders in the picture. And somehow, two players are standing right there on the doorstep. The puck pops free for Oliver Wahlstrom and he’s the one getting the payoff.

There’s a lot wrong with this picture. Justin Braun and Travis Sanheim are right on top of each other. Sean Couturier is attached to the same player. Joel Farabee is way behind on his coverage, which allows Wahlstrom to be open. Brian Elliott thinks he has control, only to find out that the puck was loose the whole time and in the net.

And the most concerning thing is that with five bodies around the net, no one makes an attempt to clear the porch. No one gets physical in an area where you need to win those battles for your goalie. It’s that kind of soft play that makes it easy for teams like the Islanders to get goals like that.

Before the Flyers lost this game in overtime, there’s a missed opportunity at the end of the third that proved just as disappointing.

Following the Islanders goal, the Flyers actually had a good response. They were back to controlling play in the offensive zone. There were no shots on goal for the Islanders for nearly 10 minutes. Things were trending in the right direction for the Flyers to still find a way to win this game.

It seemed like the stars were aligning for that when the Islanders took a penalty with 1:49 to play, giving the Flyers a late third-period power play.

This is where it had to happen for the Flyers, and there was just never that good look where they could truly take advantage. Too much passing, too many mistakes. At one point, Erik Gustafsson threw a drop pass back to a trailing Islander for one of the most egregious turnovers you will ever see.

That forced overtime, and after the 11 seconds of 4-on-3 time for the Flyers, the game went to 4-on-4. There was never a stoppage.

I’m not sure why the Flyers didn’t try to take more perimeter shots in the overtime for the purpose of just getting a stoppage so the game could go to 3-on-3. They have typically done well with the extra space and the ability to create potential odd-man situations in that.

Instead, the game stayed at 4-on-4, the Islanders got all the shots in the extra session, and it was another turnover that handed the Flyers a familiar result.

Joel Farabee is trying to make a pass to Shayne Gostisbehere. He’s in a bit of an awkward position, and doesn’t handle it cleanly, so he tries to chip it to the boards. Honestly, we’re not even talking about this play if the puck clears the zone. There’s enough time for recovery then, even if it’s a turnover. But the puck stayed in the zone, and Jean-Gabriel Pageau is the first to it as Anthony Beauvillier heads to the net.

Beauvillier receives the pass, gets Elliott down, then goes around the net and beats him out the other side.

The process in this game was certainly better from the Flyers. It’s one of those games where you say that if you play like that most nights, you’ll get a better result. Given the opponents the Flyers have coming up, that may very well be true.

But that’s exactly the problem it creates for the Flyers. By losing the second point, by not getting a win in a game where they may have deserved a better fate, it only digs the hole a little deeper. There is no room for moral victories anymore. It may, in fact, take wins in every game against the collection of New Jersey, the Rangers and Buffalo just to make it believable that this team could actually end up back in the playoff race.

It was certainly encouraging to watch the Flyers seemingly play better and have a better process against a team like the Islanders. It doesn’t change the disappointment or frustration of the result, especially as the season slips further away.