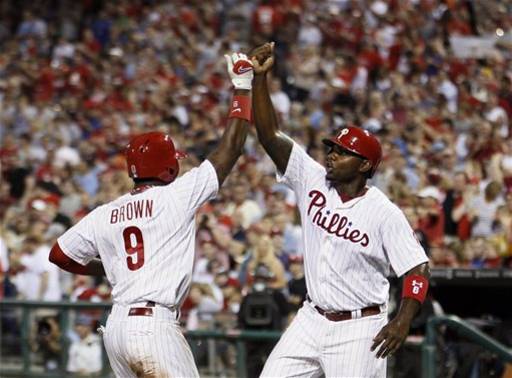 PHILADELPHIA—With his first step to first base after making contact with a 2-2 changeup in the sixth inning, Domonic Brown broke into a walk.

At this point, he just knows what his home runs feel like.

If the Phillies this season have a chance to learn how winning wears, it’s behind this guy.

Brown erupted a two-run homer, his National League-leading 17th this season, to ignite a four-run sixth inning and power the Phillies past the Marlins, 7-2, at Citizens Bank Park tonight.

He seems to be only settling in.

For doing precisely what he did tonight, defibrillating a sputtering team and electrifying a weary fan base, the Phillies left fielder was earlier today named National League Player of the Week for the second straight week, an accomplishment no Phillie can boast. He was also named NL Player of the Month of May. The natural progression for Brown should have Phillies fans wide-eyed.

As all of them have for about a week now, Brown’s night makes for history. He’s now left the yard nine times in 10 games, the first Phillie to do so since Bobby Abreu in May 2005.

But more pressing for the moment is that the team capitalize on its circumstances. Of 26 games in June, 23 are against sub-.500 teams. Their best chance to scale their eight-game NL Wild Card hole and sustain a winning streak of more than four games, something they’ve yet to do this season, is by riding Brown’s charmed wave of success.

Especially since it seems so contagious.

“If we score seven or more runs a night, we’re going to win a lot of games,” said manager Charlie Manuel. “I like my chances. Me, I’d like to score 10 or 15 every night.”

Kyle Kendrick (5-3, 3.12 ERA) actually played catalyst tonight, not just with his arm, but with a scintillating triple off Marlins starter Tom Koehler (0-4, 3.70 ERA)  in what became a three-run fifth to take a one-run lead. Before, Erik Kratz crushed a leadoff solo shot to get the Phillies on the board. After, Ben Revere knocked him in, then stole second and swiped third on a wild throw. Cesar Hernandez popped his first major league RBI on a ground out to score Revere.

In the sixth, Ryan Howard smeared a leadoff double. Then came Brown. Then Delmon Young, who laced one to right for the Phillies sixth set of back to back jacks this year. The Phillies had only seven all of last year. Brown has been involved in four of them this time around.

Freddy Galvis followed up with a standup triple, and coolly dipped under a tag at home to score on a Kendrick ground-out.

But this game, this mojo, where did that all start? Arguably, with Brown.

“When you’re running into a streak like Domonic Brown’s in right now, it’s great and definitely affects us,” Manuel said. “The people that’s playing around him, it affects them, too.”

Kendrick was masterful tonight, tossing his second complete game this season, surrendering only two runs on six hits and striking out five. He extended his win streak over the Marlins to 10 games, tied for the longest active run against any one team with Roy Halladay (vs. BAL) and Andy Pettitte (vs. Kansas City). He hasn’t lost to Miami since Sept. 9, 2008.

“It was fun,” Kendrick said. “The hit was pretty awesome. My dad was here for that. I’m sure he enjoyed it. It was a fun night, that’s for sure.”

It’s becoming routine for Kendrick. He pitches over mistakes, escapes jams and gets stronger as he goes deeper. But even if tonight would’ve made for the best gone to waste, the lineup has squandered many a top caliber pitching performance this season.

They continue to cash in on those, and their pockets will be full of Ws. If that happens, Brown will be the designated grabber and stuffer, as he’s been for over a month now.